Timber was released by Midway in 1984.  The premise of the game was relatively simple:  Chop down all the trees in each level before time runs out.  In this game, the player assumed the role of a lumberjack, and with his trusty axe, he would chop down every tree that would spontaneously pop up on the screen.  One cool thing about it was two players could play at once, either cooperatively or competitively.  There were two joysticks, one to control the players movements, and the other to control the chopping of the trees.  There were hazards, such as a bear that would throw beehives at the player, falling trees, and the need to avoid tree stumps that would cause a player to trip.  As the player advanced levels, more and more trees would need to be chopped down with less and less time available.  Some of you may remember the log roll bonus rounds, whereby the player would have to remain balanced on a rolling log until time expired. 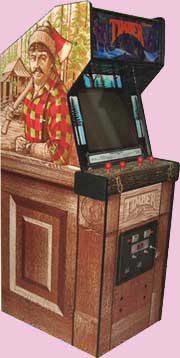 Timber was similar in nature to Tapper, in that both featured the same types of animation and were both produced by Midway.  Timber and Tapper where both later released on Midway Arcade Treasures for he GameCube, Xbox, and PlayStation.