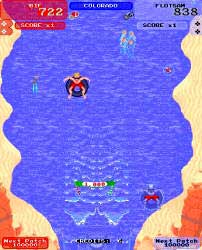 Toobin’ was a unique arcade game released by Atari in 1988.  The game was essentially about tubing down a river while avoiding obstacles.  Up to two players could play at once, each taking control of one of the two game characters, Biff or Jet.  If there was only one player, the computer controlled opponent was name Flotsam.  Player would earn points by swishing gates, hitting other characters in the game with cans, collecting hidden letters, and picking up treasures.  Obstacles included things like alligators, snakes, twigs, rocks, and of course the other players.  There were three different classes of rivers, for a total of 15 rivers.  For example, the easy class featured the Colorado or Amazon rivers, and the hardest class featured made up rivers with names like Jurassic and Canals of Mars.

Toobin’ was developed for a number of home consoles, such as the NES, Commodore 64, Gameboy, and many more.  It was also included on the Midway Arcade Treasures and Midway Arcade Origins compilation for contemporary systems (Xbox, PlayStation, GameCube, Wii).