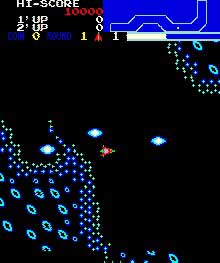 Vanguard was a scrolling shooter released by Centuri in 1981, and very similar to the game Scramble.  It was one of the early games that used digitized voice.  In this game, the player would pilot a ship through a series of cave zones that progressed horizontally or vertically, with limited fuel.  The player flew through the caves in an effort to find and destroy The Gond, which had been terrorizing nearby space colonies.  There were 10 total cavernous zones in the game, such as the Mountain Zone, Styx Zone, and Bleak Zone.  While maneuvering through the zones and trying to avoid the ever-changing terrain, the player could shoot in four different directions in order to blow up enemy ships.  Additional few was granted by blowing up enemy ships, and energy pods could be used for short periods of invulnerability.

Vanguard was developed for home systems like the Atari 2600 and Atari 5200.  We remember wasting many hours playing it on the Atari 2600.  Many of you may have even played the 1984 sequel, Vanguard II, which was essentially the same game, but with better graphics.