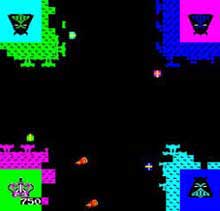 Warlords was released by Atari in 1980.  In many ways, Warlords was a cross between Breakout and Pong.  Up to four players could play at once on the sit down version of the game, and two players on the stand up version.  Each player had a fortress in their corner of the screen to protect.  Essentially, the game was a battle between four warlords, each warlord intent on being the only survivor.  Each player, using a spinner control, would launch a fireball at other fortresses in order to knock down their walls.  Once the walls were down, the crown/mask in the middle could be destroyed.  The last player standing was the winner. 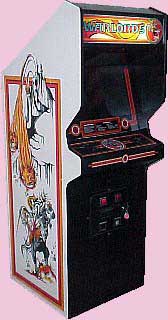 The game was developed for some home consoles, like the Atari 2600.  The Atari 2600 version was one of the few games that used the paddle controls.  The original version was re-released in later years on the Retro Atari Classics, Xbox Live Arcade, Microsoft’s Game Room, and a number of other contemporary compilations.