The fast food hamburger chain Wendy's found great success with the "Where's the Beef" commercial slogan of the 1980's.  The commercials first began airing in 1984, and featured three old ladies poking at a big hamburger bun and exclaiming how "very big" and "very fluffy" it was.  One of the ladies, actress Clara Peller, would interupt and exclaim "where's the beef?"  This catch phrase became a way to question the substance of any type of idea or product.  Later commericials featured Pellar exclaiming the same catch phrase in similar situations.

In 1984, songwriter Coyote McCloud created a hit song titled "Where's the Beef", which actually which actually featured Clara Pellar.  The phrase was so popular, you could even get things like bumper stickers and t-shirts.  In 1985, Pellar did a commerical for Prego pasta sauce where she exclaimed that she "finally found the beef", and that was the end of her tenure with Wendy's. 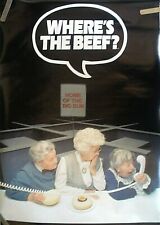