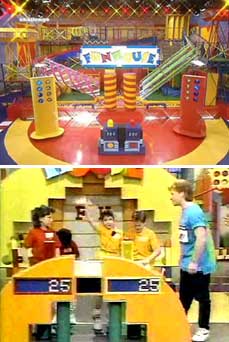 The Fun House, also known as Fox's Fun House, was a kid's game show that ran from 1988 to 1991 (the last year was on Fox).  The show was hosted by J.D. Roth, assisted by twin girls Jackie and Sammi Forrest, and featured two teams of kids answering trivia questions so that the winning team could take place in a messy obstacle course at the end of the show (to win cash and prizes).  It is worth noting that a college-aged version of this show, called College Mad House, was also in weekly syndication at the time.

In Fun House, each team consisted of a boy and a girl.  The first round consisted of a number of different games, such as Pinhead and Dump-O, where players were required to answer a certain number of questions in a short period of time.  The loser would be doused in slime, garbage, or some other disgusting muck.  The next round was the Grand Prix race round, which featured teams running around a track (or pushing some type of vehicle) collecting tokens.  The winning team of this round would advance to the Fun House, which was an obstacle course containing tags that represented prizes or cash.  The players would tag team on finding things in the Fun House.  Tags would be hidden in the various "rooms", such as the Balloon Lagoon, Fundromat, or the Shaky Quaky Room.