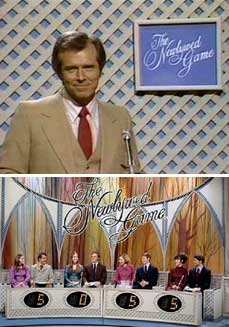 The Newlywed Game was a very long running show (started in 1966) with a number of different runs throughout the 70's and 80's.  The show was most often hosted by Bob Eubanks, but also by Jim Lange and Paul Rodriquez at times during the 1980's.

The Newlywed Game featured just-married couples against each other by asking revealing questions that demonstrated how well the couples knew each other.  For example, in round one, wives were taken off stage and the husbands where asked three questions that they wrote the answers down to.  The wives were brought back, asked the same questions, and the answered were compared.  Matches were worth 5 points.  Many questions revolved around sex, which they initially referred to as "making whoppee" to avoid network censors.  The couple with the most points at the end of the rounds would win the game (and get a second honeymoon).