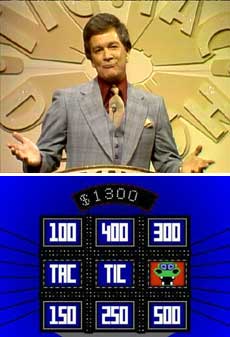 Tic-Tac-Dough first aired from 1956 to 1959, and then from 1978 to 1986 (with a short-lived reboot in 1990).  From 1978 to 1985, the show was hosted by Wink Martindale, and then Jim Caldwell for its final 80's year.  The game was essentially a version of the paper-based game Tic-Tac-Toe where contestants competed for cash and prizes (such as cars).  Contestants were allowed to return until they were defeated (the most any player ever won was $312,700 in cash and prizes).

In Tic-Tac-Dough, contestants would answer trivia questions by picking a category in a given square.  If answered correctly, the player would be able to place their X or O in that category square on the board.  Like in the paper version of the game, the idea was to get three X's or O's in a row.  The center section of the board (the most critical box of tic-tac-toe) required a two-part answer.  Each square had a certain monetary value, and the player with the most money at the end of the game won and moved onto the bonus round (called Beat the Dragon).  In the bonus round, the player tried to find the words "Tic" and "Tac" without picking the dragon square.