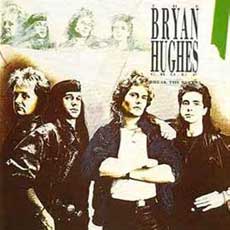 Bryan Hughes was a Canadian AOR rocker that started out in the early 1980’s in a band called Beau Geste.  Early recordings were in French, but in 1986, they released their first album in English (called Another Night in the City).  Many of these songs are AOR, but a few Beau Geste songs can be labled as hard rock.  By the early 1990’s, Hughes was operating as the band the Bryan Hughes Group, and the album Break the Rules was released in 1990.  Some of you may remember the song “She’s the Type” from this album.

If you are a fan of AOR rockers like Bryan Adams, you should really check out Beau Geste (we really like their 1986 release).  If you like the harder AOR metal sound (that includes a little keyboards), then the Bryan Hughes Group is really good.   It is our understanding that some of his songs were even pinned by Aldo Nova.  Hughes had a great voice and a knack for good rock.

The Bryan Hughes Discography is as follows: