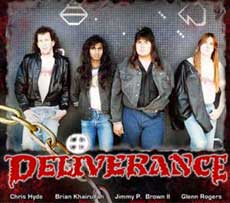 Deliverance was a Christian thrash metal band that was formed in 1985 by Jimmy P. Brown II (the only constant member of the band).  The band released their first album (self-titled) in 1989 and followed it up with Weapons of Our Warfare in 1990.  Fans of Deliverance may remember the song “Weapons” from this album.

In the early 1990’s, Deliverance decided to change their musical direction from speed metal to progressive metal.  The change was made so the band could continue providing an efficacious ministry.  Fans of early Deliverance may not like their new style, although we consider it more palatable given we were never thrash metal fans.  Deliverance was active well into the 2010’s.

At the time of this writing, the Deliverance Discography was as follows: