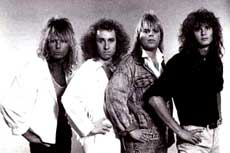 Leviticus was a Christian metal band from Sweden that formed in the early 1980’s.  They released an EP in 1982, which was their only album released 100% in Swedish.  They released their first full album, I Shall Conquer, in 1984 (released in both English and Swedish).  It was the band’s 1985 release, the Strongest Power, which began getting them noticed.  Their first album to be recorded in the USA was 1989’s Knights of Heaven.

Shortly after their 1989 release, Leviticus went on hiatus.  They returned in the early 2000’s for some new shows and a new live recording. They were still active in the 2010’s.  The Leviticus Discography is as follows: