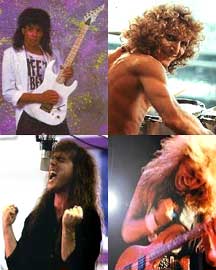 In 1986, veteran rockers Tony MacAlpine (guitars), Tommy Aldridge (drums - Ozzy Osbourne, Whitesnake), Rob Rock (vocalist - Impletteri, Joshua) and Rudy Sarzo (bass guitar - Quiet Riot, Ozzy Osbourne, Whitesnake) came together to form the short-lived band M.A.R.S. (first initial of each of their last names).  It is our understanding that Rudy Sarzo, along with Ozzy Osbournce mate Tommy Aldridge, formed the band.  The duo would again work together from 1987 through 1994 with David Coverdale in Whitesnake.

The band released only one album on the Shrapnel label in 1986 (titled Project Driver).  Given that the project was short-lived, the members of M.A.R.S. went on to other, well-known projects.  The M.A.R.S. Discography is as follows: