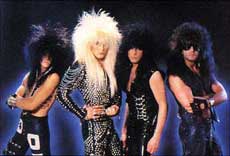 Nitro was an over-the-top metal band from Hollywood, CA that was formed by Jim Gillette in 1987.  That same year, Gillette had released a solo album that featured contributions from the members that would later become the band Nitro.  After forming Nitro, the band landed a record deal with Rampage Records and released their first studio album, O.F.R., in 1989.  The band released their second album, Nitro II: H.W.D.W.S., in 1991.

By 1993, Nitro had gone through a number of line-up changes, and they decided to call it quits.  The band's final release, an album put out in 1999, is a compilation of early band demos.  Gillette was known for having one of the highest pitched voices in heavy metal.  Members of the band purposely had an over-the-top metal style with big hair, serious gazes, and studded leather pants.  The Nitro Discography is as follows: