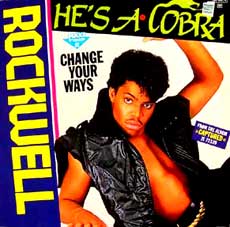 Kennedy William Gordy, aka Rockwell, was the son of Motown founder Berry Gordy, who named him after John F. Kennedy and William "Smokey" Robinson.  As an R&B pop artist, Rockwell landed his own record deal, and it was they who recommended the stage name of Rockwell (because of the allusion).

Being a member of the Gordy family, Rockwell had the opportunity to rub shoulders with many famous artists, including the Jackson family.  He was childhood friends with Michael Jackson, and it was Michael and Jermaine who assisted Rockwell on vocals for his most famous hit, the song "Somebody's Watching Me", which became a hit song in the US and the UK.  The only other top 40 hit for Rockwell was the song "Obscene Phone Caller".  Both songs were released on 1984's Somebody's Watching Me album.

Although Rockwell released a few more albums in the 1980's, he was never able to reach the popularity of his debut release.  It is worth mentioning that Rockwell did contribute a couple of songs to The Last Dragon movie soundtrack.  The Rockwell Discography is as follows: 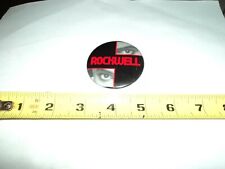 Rockwell SOMEBODY'S WATCHING ME US Promo Only Pinback Button
$1.05