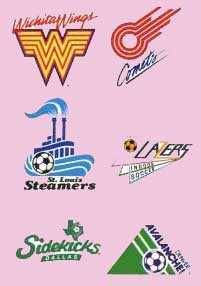 In the late 1970's, early to mid-1980's, the Major Indoor Soccer League was quite a big deal in may parts of the USA, peaking in the early 1980's.  It was not unusual for 10k fans to pack a stadium during a playoff game.  The first iteration of the MISL went from 1978 to 1992, with a reboot in 2008 that lasted until 2014.  Initially, there was only 6 teams, but by the time it was over, there were 24 teams.  Not all teams survived the entire time.  Only two teams, the Houston Summit and the Baltimore Blast played through all 14 seasons.  The longest team in a single city was the Wichita Wings, which lasted 13 seasons.  Other long-standing teams included the San Diego Sockers, Detroit Lighting, San Francisco Fog, and the Kansas City Comets.  Other teams you may remember included the Dallas Sidekicks, St. Louis Steamers, Los Angeles Lazers, New York Arrows, Cincinnati Kids, Denver Avalanche, Chicago Sting, Buffalo Stallions, Cleveland Force, Las Vegas Americans, and the Phoenix Inferno.