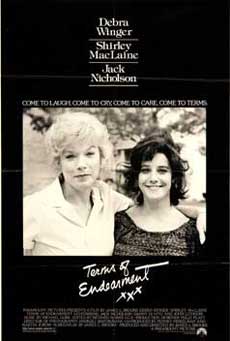 "Come to laugh, come to cry, come to care, come to terms".  Terms of Endearment, a drama starring Shirley Maclaine as Aurora Greenway, Debra Winger as Emma Greenway-Horton, Jack Nicholson as Garrett Breedlove, Danny DeVito as Vernon Dahlart, John Lithgow as Sam Burns, and Jeff Daniels as Flap Horton, was released in 1983.  The movie was well received with critics, and is considered one of the better “tear-jerkers” to come out of the 1980’s.  Roger Ebert gave the film four stars, and it went on to win the Academy Award for Best Picture in 1983 (as well as 4 other Academy Awards).  It was a huge financial success for Paramount pictures, earning over $100 million dollars.

In this movie, Emma (Winger) both loves and despises here widowed mother, Aurora (Maclaine).  The story follows the mother and daughter through the years, as Emma gets married to Flap Horton (Daniels), has children, and moves hundreds of miles away.  As Emma’s marriage becomes strange, both she and Flap begin to stray, and Emma begins an affair with a much older Sam Burns (Lithgow).

At the same time, Aurora too seeks fulfillment in her life, and although she has a number of suitors, only the wild Garrett Breedlove (Nicholson) catches her attention, and the two begin a heated relationship.  As Emma’s relationship with Flap becomes more strained, even after a reconciliation attempt, it is discovered that Emma has cancer.  As Emma lay on her death bed, Aurora convinces Flap to allow her to raise her grandchildren, which would ultimately allow Flap to continue his wild ways.  And thus the movie ends, after Emma passes away and Emma and Garrett embrace their new responsibilities. 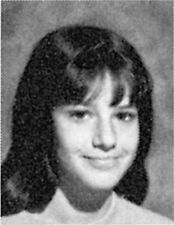 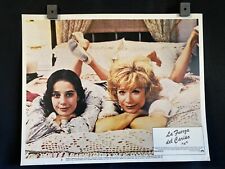 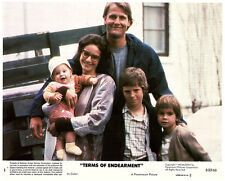 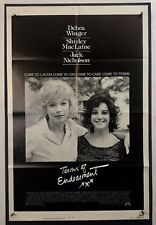 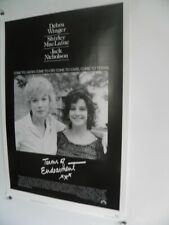 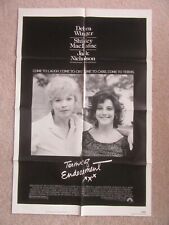 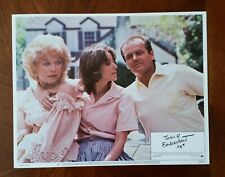