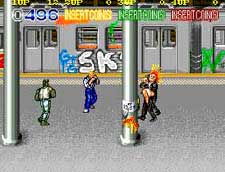 Crime Fighters was a side-scrolling, fighting game released by Konami in 1989.  There was a sequel released in 1991 called Vendetta (known as Crime Fighters 2 in Japan).  The game could have up to four simultaneous players, much like Gauntlet and Teenage Mutant Ninja Turtles.  Unlike those games, however, each player was essentially the same character in different clothes.  The characters were undercover police officers, whose goal was to rescue kidnapped girls from the mob.

At the end of each level, after battling the various enemy gangs, a boss would need to be defeated to go to the next level.  In some versions of this game, the coin credit gave a time limit, while other versions have health limits.  Each player had their own set of buttons, and a joystick, for kicking and punching.  The player could also pick up the dropped weapon of a defeated opponent and use it.  At the end of the game, if the player (s) has successfully made it past all the levels, then the user proceeds to the final level, which includes all of the previous bosses, at the same time.