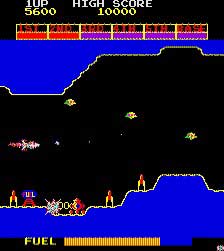 Scramble was a forced scrolling arcade game released by Konami in 1981.  In the game, the player controlled a ship along scrolling terrain, blowing up enemies, avoiding obstacles, and trying to get to the end of the level before running out of fuel.  The ship was equipped with lasers and bombs, and additional fuel could be earned by blowing up fuel tanks.  The stages were divided into six sections, each with a different style of terrain and obstacles.  There was no intermission between levels, but instead one terrain area simply switched into another as gameplay progressed.  In the final level, the player had to destroy an enemy base.  After this, the game repeats, but becomes increasingly more difficult. 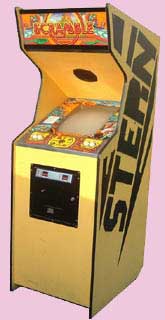 In 1981, Konami released a sequel to Scramble, called Super Cobra.  The game was the same, for the most part, but instead of a ship, the player controlled a helicopter.  Although Scramble found its way to some home systems such as the Atari 7800, it was Super Cobra that was widely released (Atari 2600, ColecoVision, Intellivision, Odyssey, etc.).  Both games were re-released together on the Konami Arcade Classics and Microsoft’s Game Room compilations for contemporary systems like the PlayStation and Xbox.