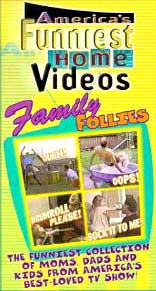 America's Funnies Home Videos sneaks into the 1980's with a late start in 1989 as a TV special.  At the time of this writing in the late 2010's, the show was still on TV.  The 1989 TV special, hosted by Bob Saget, was enough of a hit to warrant a regular season, and by early 1990, it was in weekly syndication.

The show was essentially a mix of funny home videos, sent in by viewers, which featured funny animals, prats, falls, etc.  For each episode, three videos were chosen by the producers and given to the audience to vote on.  The video that received the top votes netted the submitter a grand prize of $5k.  As the years went on, that amount went up to as much as $100k for the season's grand finale show.