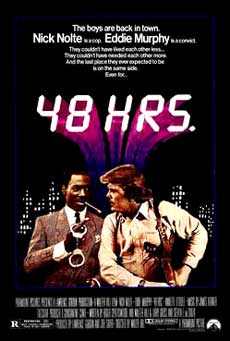 Starring Nick Nolte and Eddie Murphy, this 1982 release is one of those action-comedies that continues to stand the test of time.  Jack Cates (Nolte), a bad-tempered cop, has to enlist the help of ex-con Reggie Hammond (Murphy) to help him find some cop killers.  "48 Hours" is a reference to the amount of time in which they must solve the crime.

In the movie, a couple of convicts kill one of Jack's cop buddies, and one of those convicts happens to have worked with Reggie in the past, who is serving the remainder of a 3 year prison sentence.  Jack manages to get Reggie out of prison for 48 hours in order to help him find Reggie's old partner in crime (Albert Ganz).  Turns out Ganz turned on Reggie in the past, and both are after the drug money stashed in Reggie's old car.

In the end, the bad guys are put in their place, and Reggie and Cates become friends.  Cates agrees to let Reggie keep his drug money, as long as Reggie agrees to loan Cates some money for a new car.  48 Hours was successful enough to warrant a 1990 sequel (Another 48 Hours).  Similar to the original, Cates has 48 hours to clear his name.  Cates has shot a criminal, and the mastermind behind the syndicate has a beef against Reggie, who is about to be released from prison.