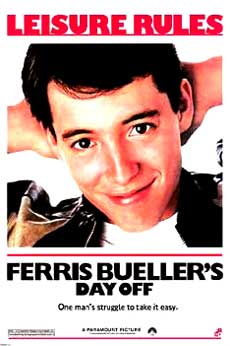 "One man's struggle to take it easy".  Released in 1986, Ferris Bueller's Day Off is by far one of the greatest 80's comedies of all time.  This coming of age movie, directed by the 80's master himself, John Hughes, starred Matthew Broderick as Ferris Bueller, Mia Sara as Sloan Peterson, and Alan Ruck as Cameron Frye.  The movie was a hit with critics back in the day, including heavy hitter Roger Ebert.  It was a financial success, and is still consider to be one of the best comedies of all times.  The movie made 70 million dollars on a 6 million dollar budget.

In this movie, Ferris Bueller (Broderick) decides to play hooky on a find spring day, feigning an illness that convinces his mother to let him stay home.  Ferris convinces his friend, Cameron (Ruck), to also skip school, and together the borrow Cameron's father's classic Ferrari and break Ferris girlfriend, Mia, out of class.  Although Ferris receives care packages and the like from friends who hear of his illness, his sister, Jeannie, and the Dean of Students, Edward Rooney, do not believe Ferris is sick.

While the friends are out gallivanting around, Mr. Rooney is on the hunt, going so far as to break into Ferris' house to try to find him.  In the end, they elude Mr. Rooney, but end up destroying the Ferrari while Cameron comes to terms with his irrational fears.  In the nick of time, Ferris makes it home just before his parents come home from work, just to find Rooney standing there.  When Jeannie finds Rooney's wallet in the house and realizes he was the intruder, she blackmails him into dropping the entire truancy issue.  And Ferris lives to skip another day.