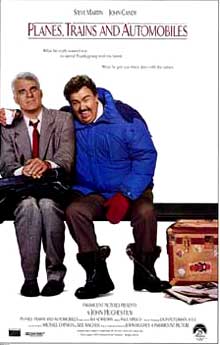 "What he really wanted was to spend Thanksgiving with his family.  What he got was three days with the turkey".  Planes, Trains, and Automobiles was a John Hughes comedy released in 1987.  The movie was inspired by a day trip that Hughes was on from Chicago to New York, where he actually ended up in Wichita, KS and did not make it back to Chicago for 5 days.  Planes, Trains, and Automobiles starred John Candy as Del Griffith and Steve Martin as Neal Page.  The movie was a hit with critics, including heavy hitters like Siskel and Ebert.  The movie was also a success at the box office.

In this movie, Neil Page (Martin) is just a regular Joe trying to get home to Chicago for the holidays.  His attempts to get home are initially, and inadvertently, thwarted by Del Griffith (Candy), a traveling salesman who is also trying to get home.  They end up trying to work together to get home, and on a flight from New York City to Chicago, weather causes the plane to be diverted to Wichita, KS.

Trying to get from Wichita to Chicago, using any means possible (train, bus, etc.), turns out to be a major failure, which was further aggravated when a thief stole all their money.  During Neil's tirades against Del and his carelessness, the two eventually become friends, and band together to reach Chicago.  The movie ends with Neil inviting a lonely Del to Neil's home for Thanksgiving.