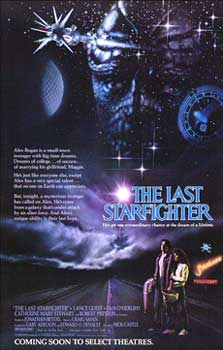 "Alex Rogan is a small-town teenager with big-time dreams.  Dreams of college...of success...of marrying his girlfriend, Maggie.  He's just like everyone else, except Alex has a very special talent...that no one on Earth can appreciate.  But, tonight, a mysterious stranger has called on Alex.  He's come from a galaxy that's under attack by an alien force.  And Alex's unique ability is their last hope."

The Last Starfighter was a science fiction adventure flick released in 1985.  It was one of the first movies to rely heavily on computer graphics.  It starred Lance Guest as Alex Rogan and Dan O'Herligy as the alien, Grig.  As a side note, the movie even featured a short cameo of Heather Locklear.  Overall, the movie received positive reviews with critics, and it was a financial success at the box office.  The movie was successful enough to feature an arcade video game about the movie.

In the movie, Alex Rogan lives a sheltered life in a trailer park with his mom an brother.  He spends much time playing a video game called The Last Starfighter up by the trailer park office.  He scores so high, that the inventor of the game, an alien disguised as a human, pays Alex a visit and invites him to learn how to fly a Starfighter for real.  He agrees, and in his absence, the alien leaves an android version of Alex at home while Alex goes off to the planet Rylos.

THE LAST STARFIGHTER BLOCKBUSTER BACKER CARD/MINI POSTER NOT A MOVIE
$4.95