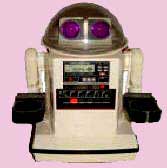 The Omnibot was a toy robot first manufactured by Tomy in the mid 80’s.  The original version had a bubble over its head, but the updated version, Omnibot 2000, did not.  Both versions came with tape players in their chests, which was used to record and playback commands.  They also came with timers that would allow the commands to be scheduled.  They also had built in speakers that could be used to broadcast the user’s voice through the remote.  Both units were also able to grasp and carry light objects using one arm, but if you lost your remote, you basically had to use it as a paper weight.  If you had the Ombibot 2000, you will remember it had a drink tray that it would use to server drinks with.