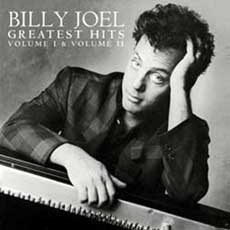 Billy Joel, The Stranger; Rare Badge Given to Concert Attendees, Circa 2008
$3.00