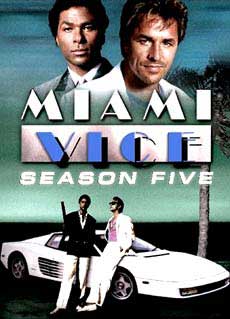 Miami Vice was an award winning action crime drama that ran from 1984 to 1989 on NBC, and was a huge 80’s hit.  The show starred Don Johnson as Detective James “Sonny” Crockett, Phillip Michael Thomas as Detective Ricardo Tubbs, and Edward James Olmos as Lieutenant Marty Castillo.  The show had a major impact on the fashion of the 80’s, with men wearing the same style of clothes found on Crockett and Tubbs, and 80’s music, considering it drew heavily on the modern new wave culture.  The show was hip.

Fans of this show will remember detective Crockett and Tubbs, patrolling the streets and waters of Miami, searching for drug dealers, street walkers, and other baddies.  They had cool guns, cool clothes, cool cars, and cool boats.  Nearly every episode ended with a major gun battle, where the drug dealers often paid a hefty price.  Episodes were loosely based around real crimes that had happened in Miami.  In the early seasons, episodes were more light hearted, often with a comical tone, but as the seasons progressed, the tone of the show turned more dark, focusing on topics like corruption and the after effects of crime.