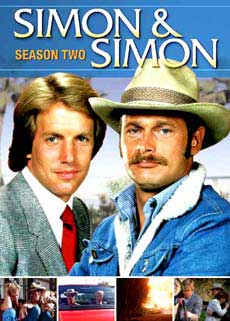 Simon and Simon was an action detective show that ran from 1981 to 1989 on CBS.  By 1982, the show was nearly canceled.  However, after moving it after Magnum P.I. on Thursday nights, the show became a hit.  The show starred Gerald McRaney as Rick Simon and Jameson Parker as A.J. Simon.  Some of you fans of this show may remember that there were cross-over episodes between Simon & Simon and Magnum P.I., where Magnum and Higgins showed up on an episode of Simon & Simon, and A.J. and Rick showed up on a Magnum P.I. episode.  In 1995, a reunion movies was aired on CBS titled Simon & Simon: In Trouble Again.

Fans of the show will remember that two brothers with different personalities, A.J. (Parker) and Rick (McRaney) Simon operate a private detective agency out of San Diego.  A. J. was more refined than his brother, with a law degree and affinity for fine living, while Rick was a bit rougher around the edges, as a Vietnam vet with black market connections.  Together they would go about the business of solving cases, saving the day, and getting the girl.