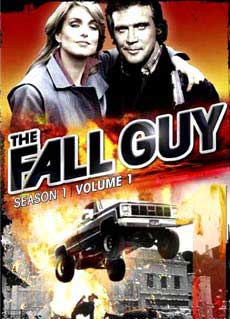 The Fall Guy, an action/adventure show which ran from 1981 to 1986 on ABC, made every junior high age boy in America want to hang a picture of Heather Thomas up in their room.  The series starred Lee Majors as Colt Seavers, Douglas Barr as Howie Munson, and Heather Thomas as Jody Banks.  The show was a big success for ABC.  At the time of this writing in late 2014, it was purported that a full featured film was currently in the works.

In this TV series, Colt Seavers (Majors), a Hollywood stuntman, works as a bounty hunter on the side to make ends meet.  His skills as a stuntman often prove to be the catalyst that allows him to snatch up the baddies.  Colt was often accompanied by his braniac cousin, Howie, who was a stuntman-in-training, and also by the long-legged Jodi (Heather Thomas), who was also a stunt “person”. Shows would typically begin with Colt performing some movie stunt, only later to be assigned some bounty hunter gig to hunt down some crook that jumped bail.  The show featured tons of guest appearances by famous actors, including Lee Major’s ex-wife, Farah Fawcett.  And the theme song, “the Unknown Stuntman”, was actually performed by Lee Majors himself.

THE FALL GUY 1982 Emmy ad with Shecky Greene and with Lee Majors as Colt Seavers
$7.98