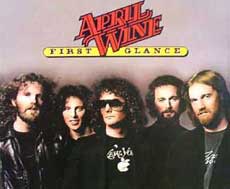 April Wine was a Canadian band that formed way back in 1969 by brothers David and Ritchie Henman.  Many people are curious about the band's name, and the word on the street is that the band called themselves "April Wine" simply because they liked the way the two words sounded together (sorry, nothing more to this story).  April Wine is known as a great live band, and their discography (see below) is a testament to their long history.

April Wine debuted in 1971 with their self-titled release produced by Aquarius Records (featured the song "Fast Train").  Their second release, On Record, featured the hit songs "You Could Have Been a Lady" and "Bad Side of the Moon".  Interestingly enough, founders David and Ritchie Henman eventually left the band, leaving original member Myles Goodwyn to carry the band onward.  Other 1970's songs you might remember from April Wine include "Tonight is a Wonderful Time to Fall in Love", "I Wouldn't Want to Lose Your Love", "Oowattanite", "Like a Lover, Like a Song", "You Won't Dance With Me", "Roller", "Say Hello", and "I Like to Rock".

In the 1970's, April Wine toured with bands like The Rolling Stones, Styx, Nazareth, and Rush.  In 1981, April Wine released the album Nature of the Beast, which featured great hits like "Just Between You and Me", "Sign of the Gypsy Queen", and "All Over Town".  As the 80's rolled on, touring began taking its toll on the band, and although there were a few additional releases, the band embarked on a successful "Farewell Tour".  It wasn't until 1992 that April Wine formed again, both on stage and in studio.  At the time of this writing in late 2012, April Wine was still active.

At the time of this writing, the April Wine Discography was as follows: