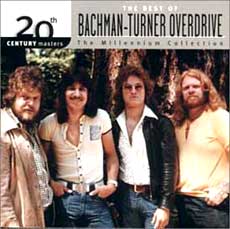 All you "Gearheads" out there know that BTO is an acronym for Bachman Turner Overdrive.  BTO had a very long career and ultimately produced five top 40 albums and six top 40 singles.  BTO formed in Canada in 1971, first as a band called Brave Belt, by Randy, Tim, and Robbie Bachman, and Fred Turner.  Gear Drive produced two albums in the early 1970's before changing their name to BTO.  The "Overdrive" in the name was chosen as an addition to the band member's names after they spotted a trucker's magazine while on the road.  They thought this described their brand of rock well.

BTO released their first self-titled album in 1973.  Initially this album did not chart as well as the band had hoped, but due to a relentless tour schedule, the band began to gain notoriety, and this album eventually went Gold.  Some of you may remember the song "Blue Collar" from this album.  The band's second release, Bachman Turner Overdrive II, featured two of their best known hits:  "Let It Ride" and "Takin' Care of Business".  The album Not Fragile was released in 1974, and featured the hit songs "Roll Down the Highway" and "You Ain't Seen Nothing Yet".  Other 70's hit songs you may remember include "Hey You", "Take It Like a Man", "Lookin' Out for #1", "Down to the Line", and "Gimme Your Money Please".

By the late 1970's, tensions had taken their toll on the band, and Randy Bachman left the group.  The band officially changed their name to BTO based on an agreement with Randy and continued producing.  By 1983, Randy was back in the band, and a new album was released again under the original full name of the band.  BTO continued producing albums in the 1980's even while the tumultuous environment festered, and even went on tour with the Sammy Hagar brand of Van Halen in 1985.

As the years have gone on, BTO has continued to produce and tour, although the original band members of come and gone like the changing seasons.  At the time of this writing, the BTO Discography was as follows: