Best Little Whorehouse in Texas, The 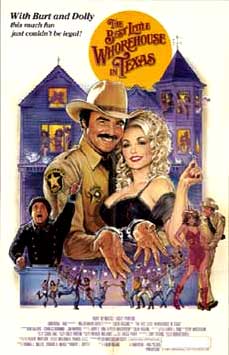 "With Burt and Dolly, this much fun just couldn't be legal!"  The Best Little Whorehouse in Texas, starring Burt Reynolds as Sherriff Ed Earl Dodd, Dolly Parton as Mona Stangley, and Dom DeLuise as Melvin P. Thorpe, was a romantic musical comedy released in 1982.  Because the word “whorehouse” was taboo in some parts of the country, the film was sometimes billed as “The Best Little Cathouse in Texas”.  The movie was a moderate success, essentially doubling its money.

In this movie, Sheriff Dodd (Reynolds) has an on-going relationship with Mona Stangley (Parton), who is the madam at a local brother called the “Chicken Ranch”.  The ranch, along with its call girls and patrons, had been a part of Gilbert, Texas for so long, it was essentially accepted as just another part of the town.  Everything is fine until a big city TV personality comes to town and does a feature story, which includes details about the Chicken House.  In the end, the publicity is too much, and the Chicken House shuts down.