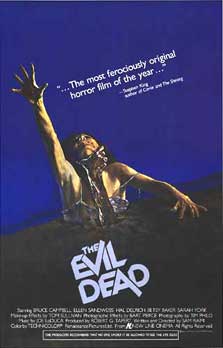 There was a total of 4 movies released in the Evil Dead franchise from 1981 through 2013 (two of these were released in the 1980’s).  The original film, released in 1981, received mostly positive reviews, and continues to be well liked.  Although the movie was not a huge financial success, as a low budget movie, it did make a sizable return for New Line Cinema.

In the original movie, a group of five college friends decide to rent a backwoods cabin in Tennessee for spring break.  Strange things begin to happen to them.  During one particular night, the cellar doors fly open, and they venture downstairs and find an old book titled "The Book of the Dead," along with a tape recording of incantations.  After playing the tape from beginning to end, which included an incantation for conjuring up demons, things begin to get weird.  One by one they become possessed and begin harming each other.

The friends are unable to escape due to the fact that the bridge is out, and those that remain begin looking for an alternate path through the woods, past the evil trees, and to safety.  When this doesn’t work, those that have not been possessed return to the cabin, and eventually everyone is killed, except a guy named Ash, who is the last man standing.  After he tosses the book they found into the fire, and the movie ends with a mass of unseen evil descending upon him in the cellar.