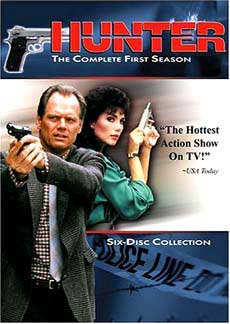 Hunter was a cop drama that ran from 1984 to 1991 on NBC that lasted for seven seasons.  This show featured Fred Dryer as Detective Rick Hunter and his partner, Stepfanie Kramer, as Dee Dee McCall.  By season 6, Kramer had left the show and replaced by two other female cops.  It was considered to be relatively violent as far as 80’s TV went.  Although it did not start out well on the Nielsen ratings, after a timeslot change, things begin to pick up.  Fans will also remember the reunion shows: The Return of Hunter: Everyone Walks in L.A (1995) and Hunter: Return to Justice (2002) and Hunter: Back in Force (2003).  A reboot of the show was attempted in 2003, but only after a few episodes, the project was nixed.

Fans of the show will remember that Hunter (Dryer) and McCall (Kramer) were homicide investigators in L.A.  The team was an unlikely duo, and often dealt with the bad guys using lethal force.  Hunter was a loose cannon, with ties to the mob, known for breaking the rules to nab the bad guys.  The show dealt with some serious topics, like in season 2, when McCall was raped by a foreign diplomat, on whom she enacted street justice.  On the humorous side, Hunter was forced to drive police clunkers around because he was constantly destroying them during chases.