Saved by the Bell 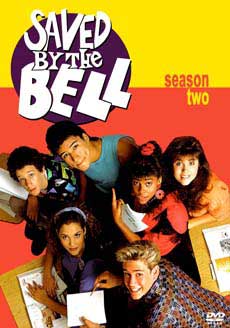 Saved by the Bell was a family/preteen comedy that ran from 1989 to 1993 on NBC.  The show was originally a Disney Channel show called Good Morning, Miss Bliss, but was renamed and re-tooled when it moved to network television.  The show basically followed the comedic situations a group of high school friends found themselves in.  The show starred Mark-Paul Gosselaar as Zack Morris, Tiffani Thiessen as Kelly Kapowski, Lark Voorhies as Lisa Turtle, Dustin Diamond as Screech Powers, Mario Lopez as A.C. Slater, Elizabeth Berkley as Jessie Spano, and Dennis Haskins as Principal Richard Belding.  In later years, there were reunion shows, as well as a couple of spin-offs (Saved by the Bell: The College Years and Saved by the Bell: The New Class).

Fans of the show will remember the students attended Bayside High School in Los Angeles. Much of the action took place at the school or at a hamburger joint called Max’s.  The show’s main character, Zack Morris (Gosselaar), would often break the “fourth wall”, by addressing the TV viewer directly after “freezing” the shows action.  Other friends included Zack’s love interest, Kelly (Thiessen), the all American cheerleader; Lisa (Voorhies), the talkative gossip queen of the group; Screech (Diamond), the nerdy tag-along that had been Zack’s friend since grade school; Slater (Lopez), the Army brat jock; Jessie (Berkley), the class president and environmentalist; Principal Belding (Haskins), the once hippie principal who is always one step behind his students.

Saved By The Bell Scrapbooks & Behind the Scenes Lot of 4 Books Dustin Diamond
$70.00