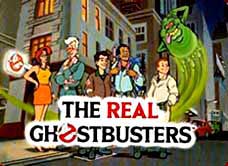 The Real Ghostbusters was a Saturday morning cartoon based on the movie series.  It aired from 1986 to 1991 on ABC.  Not only was the series popular enough to warrant two different comic book series, but also a line of toys by Kenner (which continued selling well after the last season).  By season 3, the show had been re-titled to Slimer and the Real Ghostbusters, expanded to an hour, with a few segments specifically about Slimer.  Voices for the characters were not those of the original characters.  A reboot of the series, titled Extreme Ghostbusters, kicked off in 1997.

This show basically featured the continuing ghost hunting saga of Peter Venkman, Winston Zeddemore, Egon Spengler, and Ray Stantz.  Their secretary Janine was also back, as well their ghostly mascot, Slimer.  Hunting down ghosts was not confined to the streets of New York City.  The Ghostbusters found themselves hunting ghosts all over the world in this series.