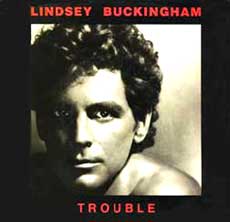 Lindsey Buckingham managed to squeeze in a solo career during this time as the lead singer for Fleetwood Mac.  Buckingham grew up in California, and by the early 1970's, he had started a music project with this then girlfriend, Stevie Nicks, called Buckingham Nicks.  The duo did release a self-titled album in 1973, but were dropped from the label after lackluster sales.

Nevertheless, the two had left their mark on some notable musicians, including Mick Fleetwood.  After Fleetwood Mac's guitarist left in 1974, Mick asked Lindsey and Stevie to join the band.  Fleetwood Mac had an amazing 1970's and early 1980's, and in the early 80's, Buckingham also pursued a solo career.  His first solo release was the album Law and Order in 1981, and it featured the hit song "Trouble".   In 1983, he contributed the song "Holiday Road" for the National Lampoon's Vacation soundtrack. His follow-up release, Go Insane, hit shelves in 1984.  Many of you will remember the hit song "Go Insane" from this album.