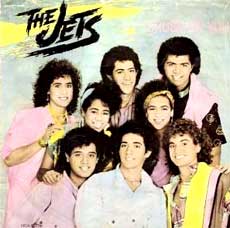 The Jets, from Minneapolis, MN, were a pop R&B band that originally consisted of eight Mormon brothers and sisters from the Wolfgramm family.  The group formed in 1985 and was known for their Latin influenced music.

The Jets debuted in 1986 with their self-title debut.  This freshman effort did very well on the US R&B charts, and had two songs that made it to #3 on the Billboard charts.  Songs you may remember from this album include "Curiosity", "Crush on You", "You Got It All", and "Private Number".  The Jets follow-up release, Magic (1987), also had a number of hits on either the Billboard, R&B, or Adult Contemporary charts:  "Cross My Broken Heart", "I Do You", "Rocket 2 U", "Make It Real", and "Sendin' All My Love".  Their final studio album in the 80's, Believe (1989), only featured one Adult Contemporary chart hit, and that was "The Same Love", which charted at 15.  It is worth mentioning that The Jets released a greatest hits album in 1990 that included two new singles, one of which ("Special Kinda Love") charted at #8 on the US Dance charts.

By 1990, the original incarnation of The Jets was done.  Some of the Wolfgramm family members did keep the band alive post 80's as a gospel band, and their have been reunion concerts from time to time (including in 2009 and 2010).  Their latest studio release, at the time of this writing, was in 2006.  Those original members who are not actively involved in The Jets continue to be involved in the music industry in one fashion or another.  The Jets Discography is as follows:

The Jets Magic I Do You Rare Original Promo Poster Ad Framed!
$49.50