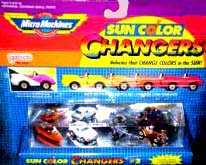 Galoob released the Micro Machines line of toys in the mid 1980's, and continued manufacturing them long after.  The Micro Machines were smaller versions of Matchbox or Hot Wheels vehicles, typically bundled with some type of play set (they were about 1/3rd the size of a typical Matchbox car).

The Micro Machines were not relegated to cars and trucks only.  There were tanks, boats, airplanes, motorcycles, and even themed sets like monster trucks, Star Trek, and Star Wars.  Many sets came with little action figures as well.  Some of you may have owned the color changing versions, as well as the "private eyes" version, that allowed you to peak inside.