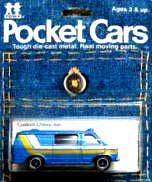 The Tomy Pocket Cars, when compared to Matchbox and Hot Wheels cars, were like the crazy uncle nobody talked about.  Some of them were pretty neat, while others were a bit boring (mundane autos that nobody really cared about).  The line started in Japan in the early 1970’s by Tomy, and was called Tomica.  By the mid 1970’s, the Tomica line had branched outside of Japan by manufacturing non-Japanese models car models.  In the USA, the cars were in blister packs with the image of a blue jeans pocket on the back of the blister card.  Because the Pocket Cars cost more than Hot Wheels or Matchbox, and because many of them were a bit bland, they pretty much peaked by 1979, but could still be found on store shelves well into the 1980’s.  It is worth noting that some of the cooler Tomica cars came with Disney characters or even Snoopy (from Peanuts) on them.