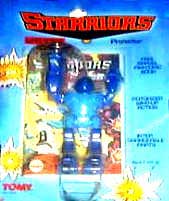 The Starriors robotic line of toys was created by Tomy and based on a 1984 Marvel comic book by the same name.  The Starriors had their roots in the Zoids line of toys, and some were similar to Transformers in appearance (although they did not transform into anything).  The story line behind the toys has a future earth being threatened by solar flares.  To protect the earth and sustain the human race, scientists create three classes of Starrior robots (with a sub-series):  The Protectors (to restore earth to normal), the Destructors (to fend off alien invasions), and the Guardians (to protect the human race while they are in suspended animation under the ground).  Eventually, the robots become self-aware, and the Destructors begin taking over.  Years later, a group of Starriors remembers their original charter, and they go about the business of waking up the human race.

The toy line was based on these Starrior robot characters.  They came in different configurations based on their Starrior “sub-class series”.  For example, the Rammors, Trashors, and Strazors were a vehicle series that had 2, 3, or 4 wheels.  The Wastor was a series of humanoid like Starriors and Cosmittors were more like dinosaurs.  The different Starriors from different series were spread across the various classes.