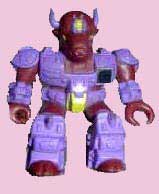 Vintage 1987 Battle Beasts Warrior Sword Imperial Toys Battle For The Fun Of It
$399.99