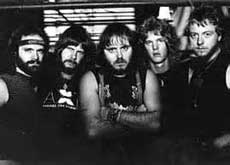 The band Axe, formerly known as Babyface, formed in Florida in 1979.  Many describe Axe as a melodic metal band since they combined the keyboards with rock guitar.  Axe is probably most recognized for their 1982 album that featured the song "Rock and Roll Party in the Streets", which made it to number 59 on the 1982 charts (from the album Offering).

Through the 1980's, Axe opened for bands like Iron Maiden, Judas Priest, Scorpions, ZZ Top, Motley Crue, and Ozzy Osbourne.  After the release of Nemesis, the band met with tragedy after the death of their guitar player in a car crash.  They subsequently disbanded.

In the late 1990's, Axe was resurrected with a 1997 release that featured re-recordings of songs from their initial four offerings. There are also multiple greatest hits releases and a newer album released in 2001called Crown.

At the time of this writing, the Axe Discography was as follows: