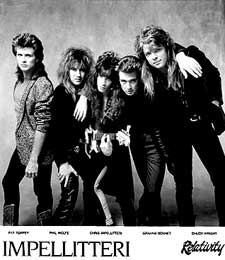 Chris Impellitteri was one of those guitar slingers who played so fast, even 10,000 speed film couldn't capture his licks (he is the one with the guitar in the photo, not the guy who looks likes like he belongs on Miami Vice). The band Impellitteri's first release was a self titled EP back in 1987.  The vocalist for this initial release was Rob Rock, although Graham Bonnet (former member of Rainbow, MSG, and Alcatrazz) was tapped as vocalist for the more widely known release, Stand in Line.  Some of you may remember that Chris Impellitteri was an occasional guest host for Headbanger's Ball.

Rob Rock returned for the 1993 release, Victim of the System.  Subsequent albums featured either Rob Rock, Graham Bonnet, and a new vocalist by the name of Curtis Skelton.

It is worth mentioning to us that Impellitteri is often cited as being a Christian band.  Not all members of Impellitteri over the years have been Christian, although Chris, Rob, and Ken are publicly Christian.  As owners of nearly all material released by Impellitteri, we can attest to the fact that some songs do have religious themes.

Impellitteri is one of our favorite metal bands.  Out of all the albums, Grin and Bear It is our favorite.  These guy's could really play.

At the time of this writing, the Impellitteri was as follows:

IMPELLITTERI play with fire,SEW ON WHITE AND YELLOW EMBROIDERED PATCH
$6.00