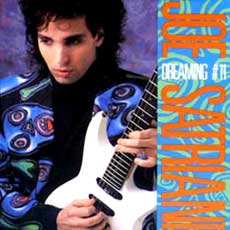 Joe Satriani was one of the greatest instrumental electric guitar players of all time (in our most humble opinion).  Back in his early days, Satriani was a guitar instructor and has had some well known students, such as Steve Vai and Kirk Hammet.  Joe has been tapped to work with many notable rock musicians, such as Mick Jagger, Alice Cooper, Deep Purple, Eric Johnson, Yngwie Malmsteen, Brian May (Queen), the Greg Kihn Band, and the band Chickenfoot (with Sammy Hagar).

Joe started playing guitar at 14 years of age.  The story goes that while on the practice football field in jr. high school, the new of Jimmy Hendrix's death reached his ear, and he subsequently renounced football for the guitar.  Satriani's early musical roots were jazz influenced.  In 1978, Joe moved to California to begin a musical career.  It was Satriani's second release, Surfing with the Alien, that begin to expand his popularity.  At the time of it's release, it was the highest charting all instrumental release in many years.  A song you may remember from this release was called "Always with You, Always with Me."  The release that brought Satriani his greatest commercial success was The Extremist, released in 1992.  You many remember the song called "Summer Song" from that album.

As the years have rolled on, Satriani has stayed very busy releasing new material and touring.  At the time of this writing, Joe's latest effort was the joint venture called "Chickenfoot", which included band members Sammy Hager on vocals, Michael Anthony (Van Halen) on bass, and Chad Smith (Red Hot Chili Peppers) on drums.  Even while working with Chickenfoot, Satriani continued releasing solo material.  At the time of this writing, the Joe Satriani Discography was as follows: