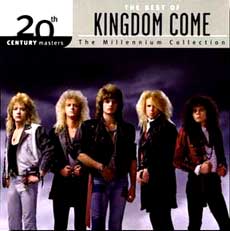 Kingdom Come was a metal band that formed in 1987.  Lead Singer Lenny Wolf, formerly of the band Stone Fury, joined Kingdom Come as the band's vocalist.  Likened to the sounds of Led Zeppelin, Kingdom Come's self-titled debut (1988) did very well with 80's metal fans who were looking for that retro 70's sound.  This album went platinum.  Many of you will remember the song "Get It On" from this album.  Another song, "What Love Can Be", also was rather popular and featured on MTV.

In 1988, Kingdom Come was tapped to open the Monsters of Rock tour, supporting Dokken, Van Halen, Scorpions, and Metallica.  Later that year, Kingdom Come opened for the Scorpions, but were asked to leave after Wolf continued using the full stage after being reprimanded multiple times by the Scorpions management crew (this is a no no as a warm up band).

Unfortunately, their second album, In Your Face (1989), was a break from their Led Zeppelin typecast, and not nearly as popular.  Evidently the band was being given monikers such as "Kingdom Clone', so they attempted to distance themselves from the genre.  It backfired.  Shortly after, all members of the band existed stage left (except Wolf) and ended up in other projects (Scorpions, Warrant).  With Wolf still on vocals, Kingdom Come released their final album in 1991 on the Polygram label (Hands of Time).

Kingdom Come has continued producing over the years, albeit mostly overseas.  At the time of this writing, the Kingdom Come Discography was as follows: