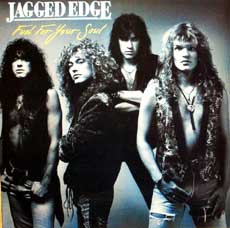 Jagged Edge, not to be confused with the American R&B band with the same name, was a metal band formed in London in 1987.  The band went through many line-up changes before getting a record deal with Polydor, and their EP, titled Trouble, was released in 1989.  Their second release, titled Fuel for Your Soul, was released in 1990.  Although it is not entirely clear, it appears that the band might have toured with Ozzy Osbourne in the UK (1988) prior to the release of these albums.

Shortly after their tour for their 1990 album was over, Polydor dropped the band and members went on to other projects after their final show together in the summer of 1991.  Although Jagged Edge never hit the big time, their feel-good releases are respectable and worth owing.  The Jagged Edge Discography is as follows:

JAGGED EDGE out in the cold-framed original advert
$11.99