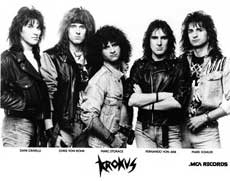 Why a heavy metal band would name themselves after an innocuous flower is beyond us.  This is not meat to be a joke.  They really did name themselves after the flower.  After all, as it is commonly known, "rok" is part of the flower's name.  Krokus, a Swiss band that formed back in 1974. was heavily influenced by AC/DC.  Prior to their  1980 release, Metal Rendezvous, Krokus had met with more than a bit of success in their home country of Switzerland.  Their 1981 release, Hardware, began to garner them international attention and featured the popular Krokus songs  "Easy Rocker" and "Rock City".

By 1982, Krokus had hired an American Management team, and Once Vice at at Time was released, the album that featured the song "Long Stick Goes Boom".  The band's 1983 release, Headhunter, continued to spur on the band's popularity by charting at 25 on the album charts.  Many of you will remember the song "Screaming in the Night" from this album, a song that received heavy rotation on MTV.  Krokus' 1984 release, The Blitz, was a more commercialized album, and featured the songs "Midnight Maniac" and the cover song "Ballroom Blitz".

Although Krokus released additional albums in the 80's, the momentum wasn't there.  Over the years, band members have reunited from time to time, and new albums have been released (much of this action has taken place in Switzerland).  At the time of this writing, the Krokus Discography was as follows: