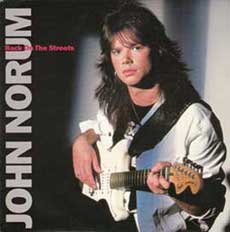 John Norum, a talented guitarist and founder of the band Europe, also had a solo career that began in 1987 with the release of his album Total Control.  This was at the same time he was still working with Europe and even Don Dokken in the late 80's.  On most songs, Norum is both lead guitarist and vocalist.  Fans of Europe will definitely like his early work.

Norum continued his solo career well into the 2010's, while at the same time still remaining active with Europe.   His sound evolved over the years to something that could be described as more contemporary metal (example is the 2005 release Optimus), but then again his 2010 release, Play Yard Blues, is nothing like his 2005 release.  At the time of this writing, the John Norum Discography was as follows: