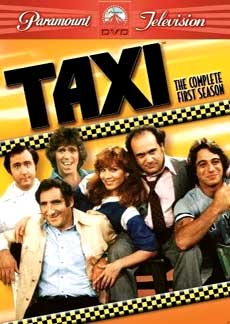 Taxi was an award winning comedy that aired from 1978 to 1983 on ABC.  The show focused on the everyday lives of a group of New York City taxi drivers.  It starred Judd Hirsch as Alex Rieger, Danny DeVito as Louie De Palma, Marilu Henner as Elain O'Connor Nardo, Tony Danza as Tony Banta, Christopher Loyd as Iggy Ignatowski, Jeff Conaway as Bobby Wheeler, Andy Kaufman as Latka Gravas, and Rhea Perlman as Zena Sherman.  The show is considered by many to be one of the greatest sitcoms ever released.

This show was basically about a group of eccentric taxi drivers for the fictional Sunshine Cab Company of Manhattan.  All of the cabbies, with the exception of Alex (Hirsch), consider the job a temporary transition until they land a better job.  In fact, a number of the episodes were about how a cabby was just about to realize their new professional dream, only to have it suddenly taken away for one reason or another.  Through the humor of the show, heavy topics such as drugs, gambling, war, and sexuality were also broached.