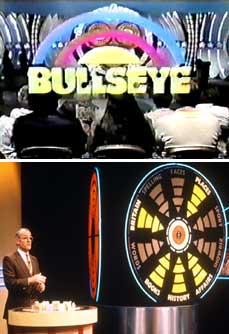 Celebrity Bullseye first ran on NBC (1980 to 1981) as a show called "Bullseye", and then it switched to CBS, where it was called "Celebrity Bullseye".  The show lasted until September of 1982 and was hosted by Jim Lange.  There were two contestants per show, one being the returning champion, and contestants played for cash prizes and cars.

In this game, players would push a plunger to stop three spinning windows placed in a pyramid (the returning champ always began first).  The top two windows featured question categories and dollar amounts (from $50 to $200), and the bottom window, called the "contract", featured the numbers 1 through 5 and a bullseye.  The player would have to choose a category, and then correctly answer the number of questions in that category demonstrated by the contract window.  Each correct answer would add money to the pot.  If the contract landed on the bullseye, the contestant could continue answering questions for as long as they wanted.  However, a wrong answer would allow their opponent to steal the pot.

The winner of the round could either bank the money and give up control to their opponent, or leave the money in the pot and continue to the next round.  The first player to win $1000 won the game and would advance to the Bonus Island round (losing contestants were also allowed to keep any money they had banked for themselves).  The Bonus Island round did not feature questions.  Instead, the player would have to stop the spinning windows at the right time to get three bullseyes or survive the round without encountering a lighting strike.  After 5 consecutive victories, a returning champ would win a new car.